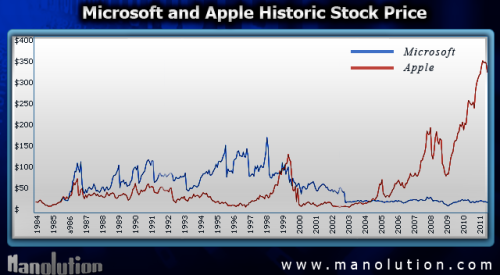 You couldn’t pay me to work for Ballmer

I’m not going to lie. I was never a Microsoft fan. Not even when I was using Windows (that I begrudgingly moved to after the Amiga). But at least you used to have some awe and respect for the gorilla that was Microsoft. Bill Gates might have been an evil genius, but at least he was a genius.

Now contrast this to Steve Ballmer. Who’s certainly no genius and calling him evil is to belittle evil. He has turned the gorilla into a buffoon. And frankly, it’s sad. Gone are the feelings of rage (except when they patent troll people for being web apps) and left is pity.

None of this is new, of course. Ballmer has be running Microsoft for more than a decade now, but when you don’t hear from the guy directly for a while, it’s easy to get lulled into the belief that he’s probably running alright. Not.

Now contrast this with Steve Jobs speaking about a much, much tougher issue at the same conference:

Jobs is lucid and reasoned. Ballmer is… Hell, I don’t even know how to describe it. He’s all over the place. No clear definitions, just randomly running his mouth. Compared to Jobs, I think it’s charitable to call him pathetic.

Jobs needs worthy opponents and Ballmer isn’t it. Look at this chart of Microsoft’s market value from the Gates to Ballmer hand-over:

Now look at this picture of Apple stock since Jobs returned:

It matters who’s at the top. It sets the company tone. Microsoft is undoubtedly full of very smart people, but as long as they are being run by Steve Ballmer, they’re going to be shackled by his ineptitude.

I wish Microsoft had their evil genius back.